The Power of Storytelling

If I told you that there was a guy named "John Montagu" who loved to play cards and he was so much into it that at the time of eating also he used to play cards with one hand and eat with the other. This was one of the problems that he used to face because he can't eat properly with only one hand. So he came up with an idea to eat meat putting it in between slices of toast, which would allow him to finally eat and play cards at the same time. Eating his newly invented "sandwich", the name for 2 slices of bread with meat in between, became one of the most popular meal inventions in the western world.

John Montagu was a British politician and aristocrat in 1748. You will notice that you will never likely forget the story of who invented the sandwich ever again. Or, you are very less likely to forget it and if it would have been in bullet form or presented in other information based forms then you are likely to forget it faster. That's the power of storytelling. For over 27,000 years, since the first cave painting were discovered, telling stories has been one of our most fundamental communication methods.

Here is the science around storytelling and how we can use to make our decisions better.

How our brains become more active when we tell stories:

We all enjoy a good story whether it is a novel, book, movie or simply anything one of our friends is explaining to us that they've experienced. Why do we feel so much engaged when we hear the narrative about events?

In fact if we see it is quite simple. If we listen to a powerpoint presentation with boring bullet points in it, there are certain parts of the brain which gets activated and that is Broca's area and Wernicke's area, which is used for language processing. It just connect words with meaning and that's it, nothing else.

When we are told stories though, things drastically changes found researchers in Spain. They found out that not only does the language processing area of the brain gets activated, but also the other areas of the brain which would have been activated if you had actually experienced the events which are told to you. A story can put your whole brain to work. And yet, it gets better. When we tell stories to others that have really helped us shape our way of thinking and way of life, we can have that same effect on them too. The brains of the person telling a story and the person listening to it can actually synchronize, says Uri Hasson from Princeton:

“When the woman spoke English, the volunteers understood her story, and their brains synchronized.  When she had activity in her insula, an emotional brain region, the listeners did too.  When her frontal cortex lit up, so did theirs. By simply telling a story, the woman could plant ideas, thoughts and emotions into the listeners’ brains.”

Anything you have experienced, you can get others to experience the same. Or at least, get their brain areas that you've activated that way, active too. Why does all that happen? The simple answer to this is: We all are wired that way. A story, if broken down into the simplest form is a connection of cause and effect. And this is exactly how we think.

Storytelling is one of the most powerful techniques that we as humans have to communicate and motivate. And lastly, I would finish this post with a quote and here it is, 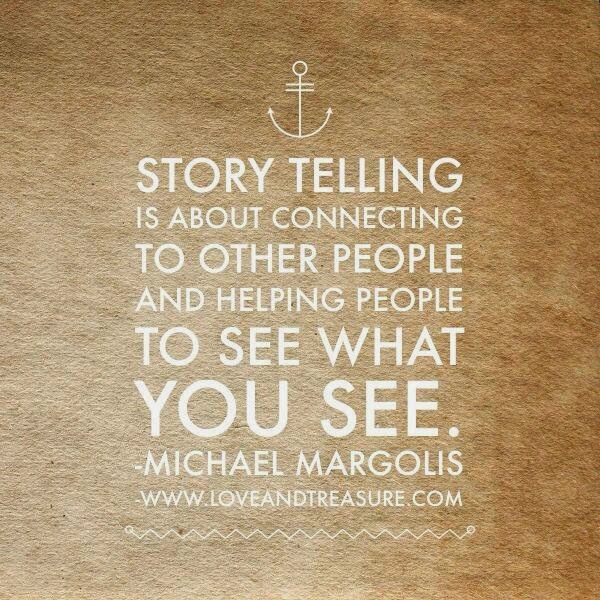