One thing that you should all keep in your mind is that whatever you do in your life, you should do it with all your heart and not because you want to show off. We all are in that trap of Rat Race, where everyone wants to run and run and compete with others and do this and that. But the thing which a lot of people don't understand is that even if you win that race you still a Rat. So, what's the use of winning that race when in the end you are still a rat? Also, a lot of people say that when they become something in life and start earning some money, then they will follow their dreams and will achieve it and will come out of this rat race. But the fact is that when you are in that rat race and you are doing well in it, then a point will come when you should actually quit from that race but then you see a lot of money rolling in. So, you again go back to that race and instead of quitting, you resume it. And a thought will come to your mind that "Let it be, it doesn't make any difference". But actually it does make a difference because you are doing something which you don't like but you are still doing it.

Many of us, say that when time comes they will do it, but nobody knows for how much time we are going to live. So, whatever you want to really do in your life do it now. There should be some hurry in starting the work which your heart says to do, because if that is not there then you will always procrastinate and delay that work and it will never be done. For example, if your heart says that you want to become a photographer, then go ahead, take a step, and do it. Don't waste your time thinking about how you will be doing it or you lack skills and all. In my opinion, just go ahead and start doing what your heart says and then later on you can think on it that what you should do in order to become an expert in that field. If you get an idea about something, go ahead and start implementing it immediately instead of thinking that you will do it few months later. When you start doing the things which you love and the things which your heart says, then you will feel wonderful and a point will come when you realize that the things which you were doing previously were actually a waste of time. This is the moment when you will start getting closer to success.

There is a great quote which says,


"Work for a cause, not for applause. Live life to express, not to impress. Don't strive to make your presence noticed, just make your absence felt".


Real success is not that what most of us think that gather some property and bank balance and keep running behind things you don't have and cry for it for the rest of your life. According to me the real success in life is "When you had done a lot of great things and even after that when you lose everything in your life, you can still die smiling".

Lastly, I would end up with a saying, 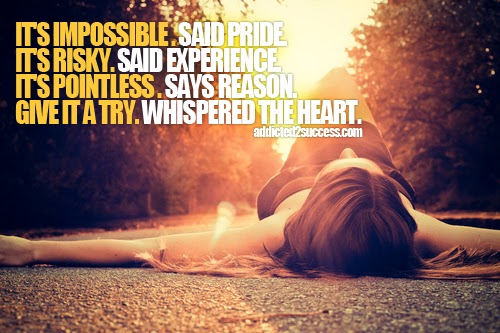