Yes, you read it right - it is Rice Bucket challenge and not the Ice bucket challenge. A lot of people including, celebrities around the world have been donating to a good cause, for ALS (Amyotrophic Lateral Sclerosis) disease through the Ice Bucket Challenge. But here in India, as the country is suffering from high levels of poverty, food insecurity and malnutrition, some people came up with an idea of Rice Bucket Challenge. This challenge is really simple. You don't have to fill a bucket with rice and pour it on your head; all you have to do is cook some food or buy some food and donate it to the poor and hungry people on the streets.

It is estimated that 32.7% of the Indian population live on less than US$ 1.25 per day. So, taking up this challenge will not only make you feel good but it will also help those poor and hungry people who don't get enough food to eat. Statistically, India accounts for One-third of the total poor population and also it is found that undernourishment kills more people than malaria, tuberculosis and AIDS combined every single year. This brings us to the conclusion that the cause which has much more importance has been ignored. By this I don't mean that I'm against any ALS donation. The point here is about our priorities; we can't ignore those 1.2 billion poor people who are undernourished for the sake of 100,000 people. Donating some food to these people will not affect us and our pockets. If people around the world start feeding the poor, then the world will be different from what it is now. How? well, people who are poor are misguided by the bad people around the globe, and those poor people are carried away by them, but it is not their fault that they are poor. They do it just to survive. They are the easy target for criminals. So, think about it. Your small act of kindness will not only feed them but will also save them from doing wrong things.

I'm not telling you to feed hundreds of people, you can even start small by feeding one or two. A lot of you maybe thinking that feeding one or two won't make a difference at all, so why feed poor people? Well, every drop in the ocean counts. So, helping one or two is also enough. If people start promoting this challenge and if by any chance this becomes viral, then a big change can happen. Now, your question will be that how much time will it take to reduce the undernourishment population to almost zero and surprisingly it will not take years, but those billion undernourished people will be healthy in a matter of few months. My humble request to all the people will be, to take this challenge and feed some poor people. It really feels good inside.

My family and I have completed this challenge and will do so again and again. Now its your turn to take on this challenge, complete it and share it with your friends on social networking sites, so that more people become aware. 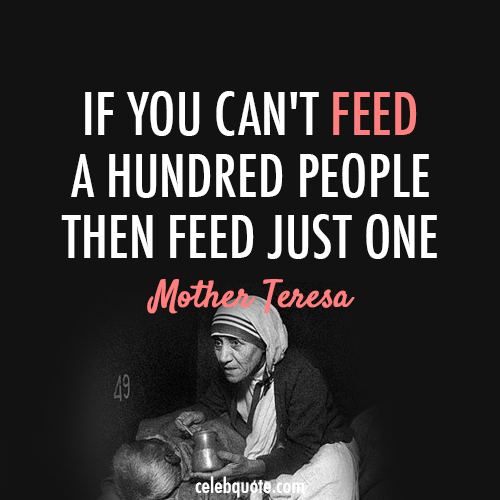