Are you really an Indian?

Let me tell you a story which will make you aware of the current situation in India.

An American visited India and went back to America after few months. He met his Indian friend who asked him, How did you find my country? The American said it is a great country with solid ancient history and immensely rich with natural resources. The Indian friend then asked, how did you find Indians? to that the American replied that "Indians? Who Indians? I didn't find or meet a single Indian there in India". The surprised Indian friend asked the American guy, "What nonsense? Who else could you meet in India then?" to this the American  guy replied that,
In Kashmir, I met a Kashmiri...
In Punjab, I met a Punjabi...
In Bihar, Maharashtra, Rajasthan, Bengal, Tamil Nadu, Kerala, I met a Bihari, Marathi, Marwadi, Bengali, Tamilian and Malayali.

Then I met,
and many more. But not a single Indian did I meet.

The reason behind me sharing this story with you all is because this is the current situation in India. When someone asks you "Who are you?", the only reply we get is that, You're Punjabi / Maharashtrian / Hindu / Muslim / Jain or many more such answers. But you are forgetting who you really are, we all are Indians and we should be proud to say that also.

Some of you maybe thinking that what change will it bring by just saying that or believing that we are Indian. But it can bring a lot of change which you might not have thought about. If you say you're hindu or muslim then you're representing that caste, if you say you're Maharashtrian or Punjabi then you're representing that State. But if you say you're an Indian, then you are representing India as a whole to the whole world. And what change will it bring? The change will be immense. If you believe that you're an Indian then you will not think of a particular caste or particular region or state, but instead you will think about the country as a whole.

Mahatma Gandhi, Bhagat Singh, Ashfaqulla Khan, Chandra Sekhar Azad and many such more great people had never ever thought about their caste or region when they did something. They believe that they are Indians and fought for the freedom of the country which you all are enjoying today, and yet so many of you regret saying that you're an Indian. This is really a disappointing fact which comes to light when we interact with the people in India.

If you could change your mindset and work towards the benefit of others then not only our country but the whole world will change. A journey of thousand miles begins with a single step. You have the power to change the world and no one can even steal this power from you. It is you who can do something to change the future and bring about a better tomorrow. And Most importantly, rather than blaming the society to bring the change or blaming the government to bring the change is lame. We should change our way of thinking towards each other and help each other. In this world, where there are many selfish people who are working for their own self interest, if some people started bringing some change and started helping each other out, then you can imagine how our country and how the world will be. Then it will not be about someone or someplace, but it will be about everyone and everyplace in the world. What will be the difference between animals and humans? If we all as human beings, forget what is Humanity and start working for our own selfish interest as many of us are doing now.

Change yourself and not your profile picture on social networking sites. Then the nation will change automatically.
I'm Proud to be an Indian and my only request to you all is, 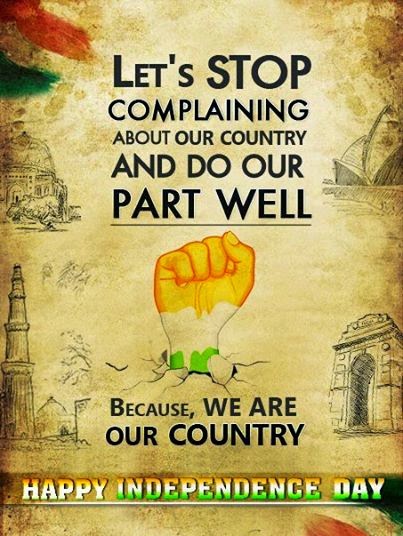