What makes a Good Leader?

When you go back in the Paleolithic era, you will find that there were dangers everywhere trying to reduce the lifespan of humans. But, as the people live in groups/tribes that time because human beings are social animals. We love to interact with each other and help our people. The groups which were there in Paleolithic era used to have at least 1 leader which was brave and would do anything so that the people around him were safe. That feeling brings a good leader in someone. Actually back in that era they used to have deep feelings of trust and love towards each other. As there were dangers everywhere, they used to protect their people when they are sleeping at night so that the people can sleep in peace and feel protected. It is the sense of trust they had between them, that if someone felt asleep then the other person will protect them if some danger arrives. If I ask someone to trust me, will the person trust me? NO, because just by saying someone to trust you doesn't bring the trust in them, it is a feeling which comes from our heart. The tribe leaders tasted the food first before letting the rest of the tribes eat, so that the tribe would be safe from any toxic elements present in the food.

This is the difference between a leader which is Good and the leader which is not. If you see in banking or business world then you will find that the people in the organization don't trust their fellow members. That's why a lot of people have visceral sense of hatred towards their bosses. It is not because they have a huge amount of difference between their salary and their bosses salary, it is because the employees know that the bosses had sacrificed their organization people to gain and get promoted. It is not about the numbers but it is about the people. Imagine if Mahatma Gandhi had got 100 million dollars for his contribution to the country by the government, will anyone disagree or think why the government is giving such a huge amount to Mahatma Gandhi, not at all. Like I said it is not about numbers it is about the sense of feeling towards each other because people know that Mahatma Gandhi had sacrificed himself so that the people may gain.

There's a company named "Next Jump" in New York and his founder is Charlie Kim. Charlie says "If you get a job in Next Jump then you will never get fired". It is not because everyone in their organization is excellent or perfect, it is because when an employee gets into problem they help them and try to solve their problem rather then firing him. It is just like when you had a fight or issue in your college/school, your parents try to solve it. By doing this the morale of the company rises and the people in the organization try to help and coordinate each other more than ever. People like Charlie Kim are the people who believes in heart counts and not head counts. And when in the same organization someone asked a group of people individually that "Why would you help other employees around you? What makes you do that?". Every one of them replied the same and that was "Because they would had done it for me if they were in my place". It is this sense of trust and feelings that brings development and love towards each other.

Further more if you want to know how a good leader is, you can take an example of your parents. They do everything for you, they provide you with good education, good opportunities, good food and teach you good things. They do everything that you couldn't imagine and they do it simply because you can achieve higher goals then they could have ever achieved or could have ever imagined. They motivate and inspire you, so that you can become a great person. They don't get anything in return except the happiness to see you achieving your goals. Good leaders are these people who sacrifice themselves so that you can live and be happy. 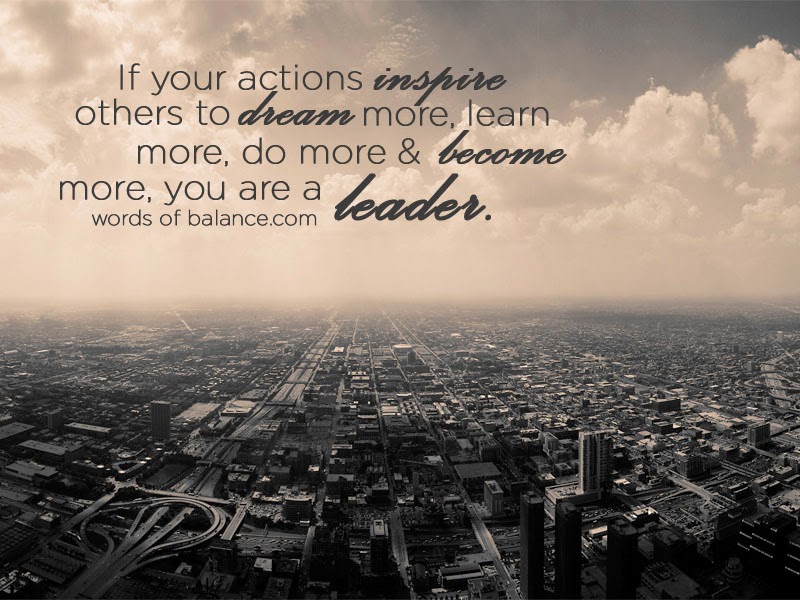