How to deal with failure

Many of us think of failure as the end of their life but that is not true. Failing is not something that shows us we are incapable of doing something, it shows that we have tried something. Trying is important because when you don't try, you have already failed.

If someone says to you that your luck or your destiny is bad and you cannot do anything with it and you have to live with that failure for the rest of your life, then ask them, "Why can't  I change my destiny and why can't I change my luck?", and the answer will come that it is not in your hand, while the fact is that it is in your hand. The way you do things and the amount of hard work you put in something defines you and not your luck or destiny. You alone have the power to change your destiny and no one else.

Many of you must have heard about an old saying, "Kise pe Zulm karna paap hain par zulm sehna usse bhi bada paap hain(It is evil to do injustice but it is more evil to endure the injustice)". But think of a situation, when someone wanted to do something and he/she has only 1 chance, at that moment many of you, almost 90% of the people, try to demotivate them by saying that you can't do it. That is the moment when the person fails in his/her task. If you think of this situation carefully you may realize that this is actually worse because someone is trying to do something and you're demotivating them by saying that you can't do it.

There are times when you will fail but life doesn't end there. There are people who will tell you to quit if you can't do it. But there are only 10% who will give you genuine reasons to quit. Those are the people I like most. They are your helping hand towards what you want to do. But that doesn't mean if they tell you to quit you obey them blindly, you should listen to them carefully, ponder on the problem and ask yourself, "How can I overcome this?". If you have the answer then you can go ahead with your task.

Recently I heard a story of 2 boys who were the very best of friends. One was of 7 years while the other was of 10 years. Once they went somewhere and the older boy fell into the well and he didn't know how to swim. He was yelling for help, so his best friend looked around for help, but no one was there. The 7 year old went to look for a solution and he saw a rope and bucket. He quickly picked it up and threw it in the well and told his best friend to hold on. The boy despite his small stature was able to lift the 10 year old boy because he was determined to succeed. Soon, after saving him, both were thinking that if they tell their friends and family about this no one would believe them. As it turned out they were right and no one believed them except an old man. The old man explained to the family that they were able to accomplish this impossible task because there was no one to demotivate or doubt whether the little boy could do it. The boy had to succeed or else his best friend would die. The thought of losing his friend motivated the little boy and helped him succeed.

Even if you failed at something or think you will fail at something, it shouldn't stop you from trying. Failure is a sign saying that you tried to accomplish something in your life and you stood for it. Your focus should be on the task rather than the reward you will get on finishing said task. There are people who work because they love it and people who do a job they hate just because the pay is good.

Imagine this is the last day of your life and you can either be depressed thinking that you're going to die the next day OR you can live your last day to the fullest. If you choose the second option then you will be the one who is UNSTOPPABLE, no one can demotivate you because you will always listen to your heart not to what others say. Be it 1 person or 1 lac people doubting you, your reaction to them will be, "Yes, I will do it and no one can stop me". You should follow your heart and do what it says rather than listen to people who are afraid to try something new out of fear.

There's a difference between a loser and a winner and that I will show you with the help of a quote, 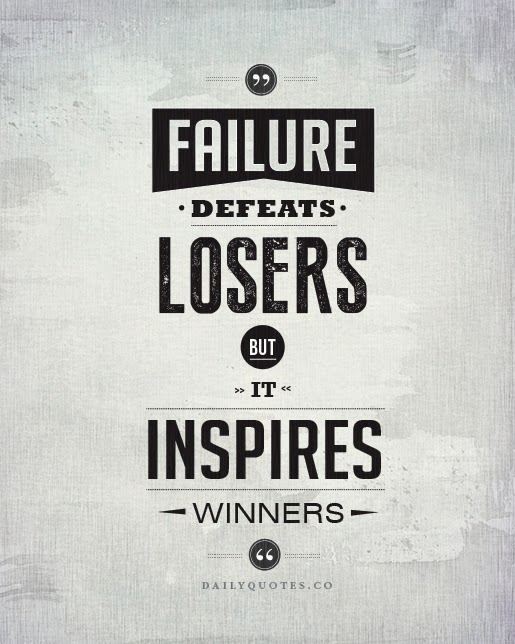